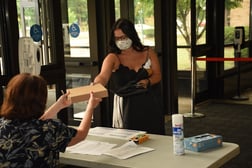 In addition to orchestrating the Virtual Ceremony, Rhode Island College hosted a diploma pickup which it dubbed “Commencement in a Box” where graduates could sign up for a time to pick up a box that contained their diploma, cords, and a program. They also had an opportunity to take a portrait on their RIC custom backdrop.  This combination of events was in place of their regular spring commencement.

Students that were only there to pick up their box were greeted at the table outside of the photography venue and given their items. For the graduates that wanted a picture made, they were allowed inside one at a time to get their box and capture their portrait.

The photographers were masked and practiced social distancing at the portrait station.  Photographers used GradImages cards which were dispensed on the table individually, and pencils were single-use only. The graduate placed their own card in the collection box for sequence.

Once the cards were completed, if graduates brought their regalia, they dressed and utilized their cords and diploma from their box (if they desired) and had their pictures taken.

All graduates were given a “Commencement in a Box” package, and about half of the candidates participated in the photo session. The main takeaway here was that even though there was no formal ceremony, the graduates were offered the option to have pictures made allowing one more special moment to be captured before they move to their post-graduate life.

Since the space was secured and only one graduate was allowed into the mobile studio area, social distancing was easily achieved. All interactions among the College staff, photographers, volunteers and graduates was kept safe through the strict adherence to distancing, mask usage and safety protocols. Graduates only removed their masks momentarily for their portraits to be captured.

Since there was no time crunch as there would be in a ceremony, the photographer was able to take multiple poses both with and without the celebratory contents of the University gift. Some graduates elected to have their professional headshot taken for resume or social media use as well.

This arrangement worked beautifully for the College and graduates alike, providing the graduates with many options to celebrate their achievement while also maintaining everyone’s safety in the process. Graduates were not obligated to participate, but appreciated the extensive efforts the College exercised to provide them with the best possible experience amid these challenging circumstances.