The best angle for a handshake photographer at commencement

What is the best angle for a photographer to stand in order to capture great handshake photographs at commencement?  Although the answer is somewhat subjective, years of purchasing data suggest one angle in particular is overwhelmingly favored by graduates and their families.  That is what we will discuss today.

So far in this series, we have examined why having a handshake photographer on stage is better than having down on the ceremony floor.  And we have also established that eight feet is approximately the best distance from the graduate for the photographer to stand.  The third and final consideration of the photograph's position is angle.  At GradImages, our photographers strive to accomplish two things:

GradImages photographers are trained to evaluate each ceremony individually.  Barring any unfavorable conditions, they will select an angle depicted in the "Ideal Location" area in the graphic below.  (Click on the graphic for a larger image.) 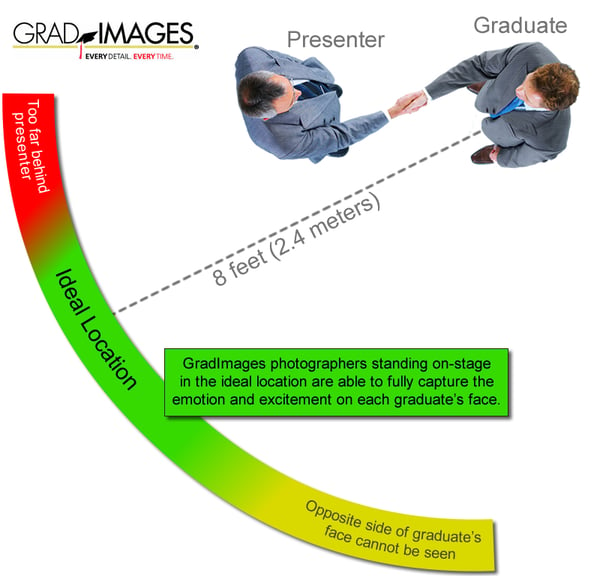 Red Zone: Too far behind the presenter

A handshake photograph taken in the Red Zone is usually unattractive.  The presenter's body takes up a disproportionate amount of the image space, and often obstructs a clear line-of-sight to the graduate.  It would normally be better for the photographer to stand down on the ceremony floor, if necessary, to avoid being on stage in the Red Zone.

Yellow Zone: too much of a profile photograph

If the handshake photographer is standing in the yellow zone, two less-than-desirable things can happen:

Assuming the photographer is permitted to stand on stage at the proper distance, a handshake photograph taken from the Green Zone guarantees the graduate will be the primary subject in the image.  Being able to see both sides of the graduate's face during this once-in-a-lifetime moment is certainly preferred over seeing only half.

If you are a GradImages client with questions about our photographer's positioning, please let us know.  Our goal is to provide your graduates with the best possible images, and we are happy to work together through any issues or concerns you may have.