Why reader lists can cause problems at commencement 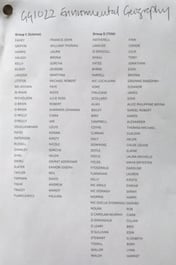 In this article, we will explore why using a reader list to announce graduate names as they cross the stage is not a best practice for commencement ceremonies.

For the sake of argument, let's assume that a "reader list" is simply any printed document with the names of graduates, sequenced in the order in which they are to be recognized on stage.  Additionally, let's assume we are talking about a commencement ceremony with a significant number of participants, not a small, intimate ceremony where the reader likely knows each graduate by name.

Reader lists at commencement do have some advantages, since they are easy to:

Despite these benefits, there are significant drawbacks which make it impossible to recommend the use of reader lists at commencement ceremonies to our client schools.

At most commencements, care is taken to make sure graduates are correctly ordered.  Yet despite rehearsals, roll-calls prior to the ceremony, and double-checks, the accuracy of their sequence cannot be guaranteed once the processional begins.  Imagine the following:

The point is that these scenarios are not uncommon at commencement.  Yet using a reader list does not afford you the flexibility to handle missing or out-of-place participants gracefully, particularly at medium-to-fast paced ceremonies.

Think about what happens when a graduate is #1 in line, about to start walking across the stage, and the wrong name is called.  She only has one of three way to respond.  Either:

Problems caused by the use of reader lists at commencements extend beyond just the ceremony.  There is also a high likelihood of multiple graduates receiving the wrong photo proofs, since the commencement photography company would need to rely on your reader list and/or an audio recording of the ceremony, both of which would have critical inaccuracies when compared to the true sequence of graduates.

For these reasons, using a reader list to announce graduate names is not recommended.  Most commencement coordinators would be better served by using reader cards.

If you are a current GradImages client using a list and would like to discuss transitioning to a reader's card, please contact your Client Service Specialist today.